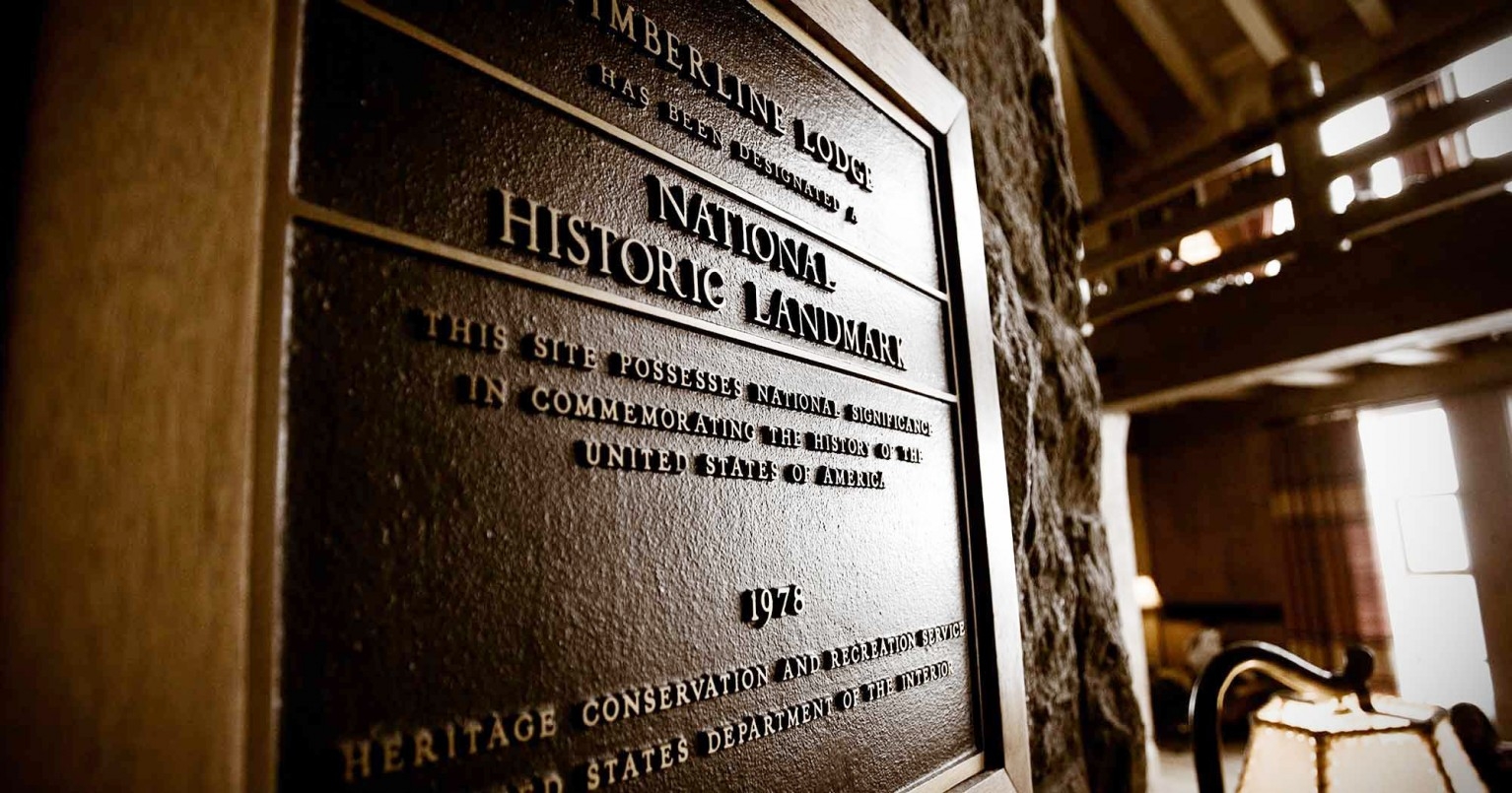 Timberline Lodge stands as a monument to the hundreds of local artisans and craftsmen who created nearly everything you see inside it—from the artwork to the furniture to the custom metal fixtures. A walk through the lodge is like walking through the history of the Mt. Hood area and the Pacific Northwest. Read more below to find out what you can expect to discover on your visit to Timberline Lodge.

The three themes for the lodge – Native American motif, pioneer, and native flora and fauna – were to be incorporated in every aspect of the lodge, down to the furniture and artwork. Works Progress Administration (WPA) interior designer Margery Hoffman Smith collaborated with textile weavers, blacksmiths, and woodworkers in order to convey those interior themes. She also selected water colors and oil paintings to adorn the lodge. The effort to use native materials, to repurpose other materials (such as old CCC uniforms for textiles), and to design domestic items to be aesthetically pleasing stemmed from the Arts and Crafts Movement of the early 20th Century.

Timberline has over 2,000 pieces of furnishings, including chairs, dressers, beds, lamps, tables, couches, and irons. Each piece needed to be compatible with the existing interior themes. Margery Hoffman Smith realized the magnitude of furnishing
a substantial-sized lodge and looked with Ray Neufer, a local cabinet maker, to again interpret these interior themes through
the furnishings. Neufer was the supervisor of 10-20 carpenters at any one time. It was in his shop that the first “ram’s head” appeared as a design symbol. This idea stuck, even though the ram isn’t native to the mountain. The furniture you see today in the lodge is a combination of originals or replicas using the same materials. 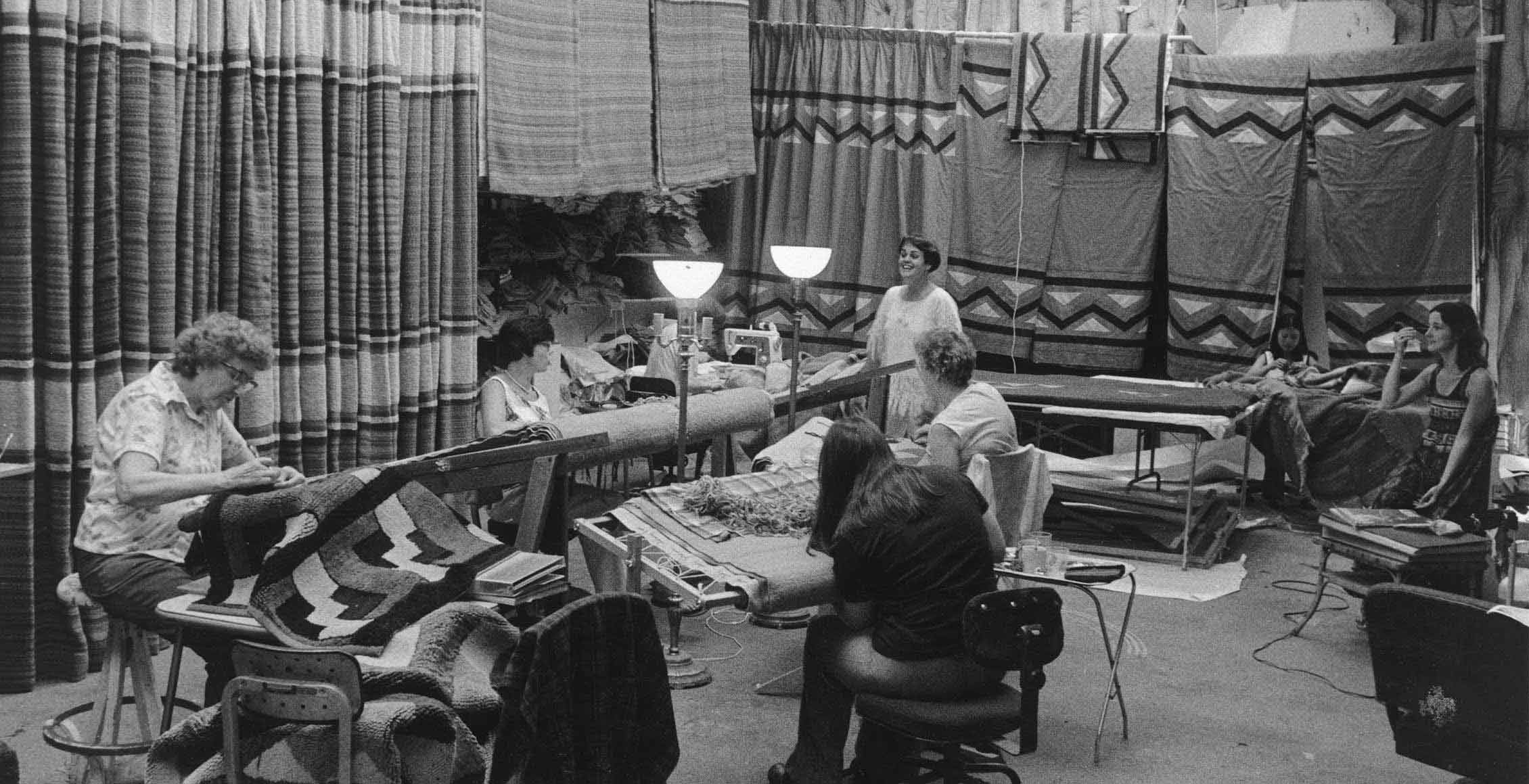 Today, only a handful of original textiles remain in the lodge, as many wore out over time. In 1975 an effort was made by Friends of Timberline (FOT) to replace the hand-made textiles including bedspreads, curtains, rugs, and upholstery. Each guestroom has its own theme related to the original motifs of the lodge. Weaving patterns of traditional designs were based on WPA workers’ fabric samples. Colors were similar to the originals: reds and browns for the Native American motif, green and gold for the natural theme, and so on. Through the Comprehensive Employment and Training Act, FOT hired 11 seamstresses and fabric artists from 1975-1977. Under the direction of Marlene Gabel and in 1977 Linny Adamson, more than 4,000 yards of fabric and 100 rugs were created by craftspeople using the same traditional skills. 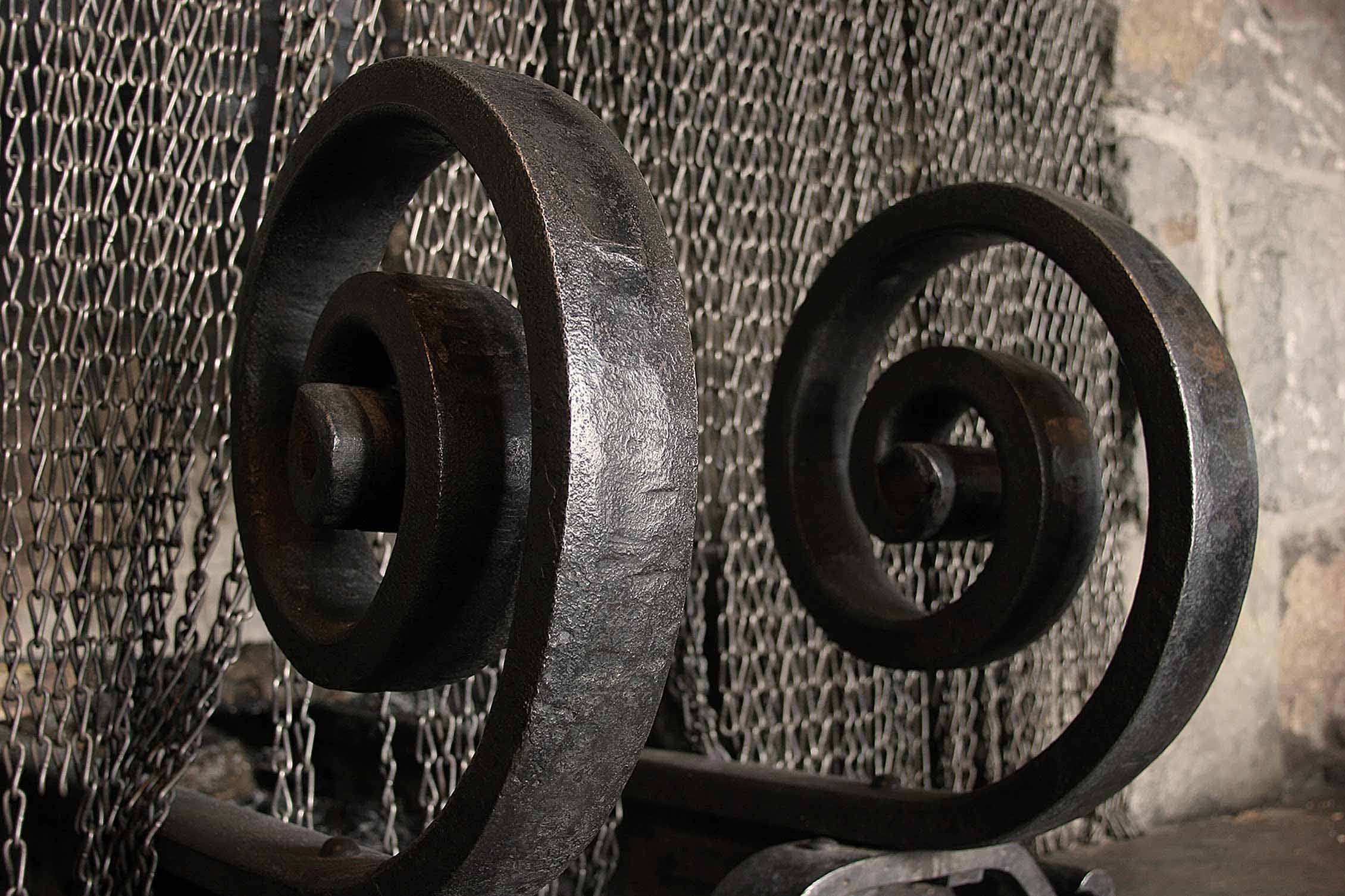 Restoration of the metalwork began in the 1970s, during which time FOT hired metalsmiths of Portland to remake ashtrays in the public areas. Arthur McArthur restored wood, iron, and rawhide chairs in the lower lobby. Much of the original metalwork was done by O.B. Dawson in the 1930s. In the late 1970s and 1980s, Russell Maugans began replicating a great deal of the metal furnishings. He worked alongside Darryl Nelson, the blacksmith who currently creates metalwork with his crew for the lodge and Silcox Hut. As you walk through the Lodge, you will see traditional skills passed down through three generations of blacksmiths. 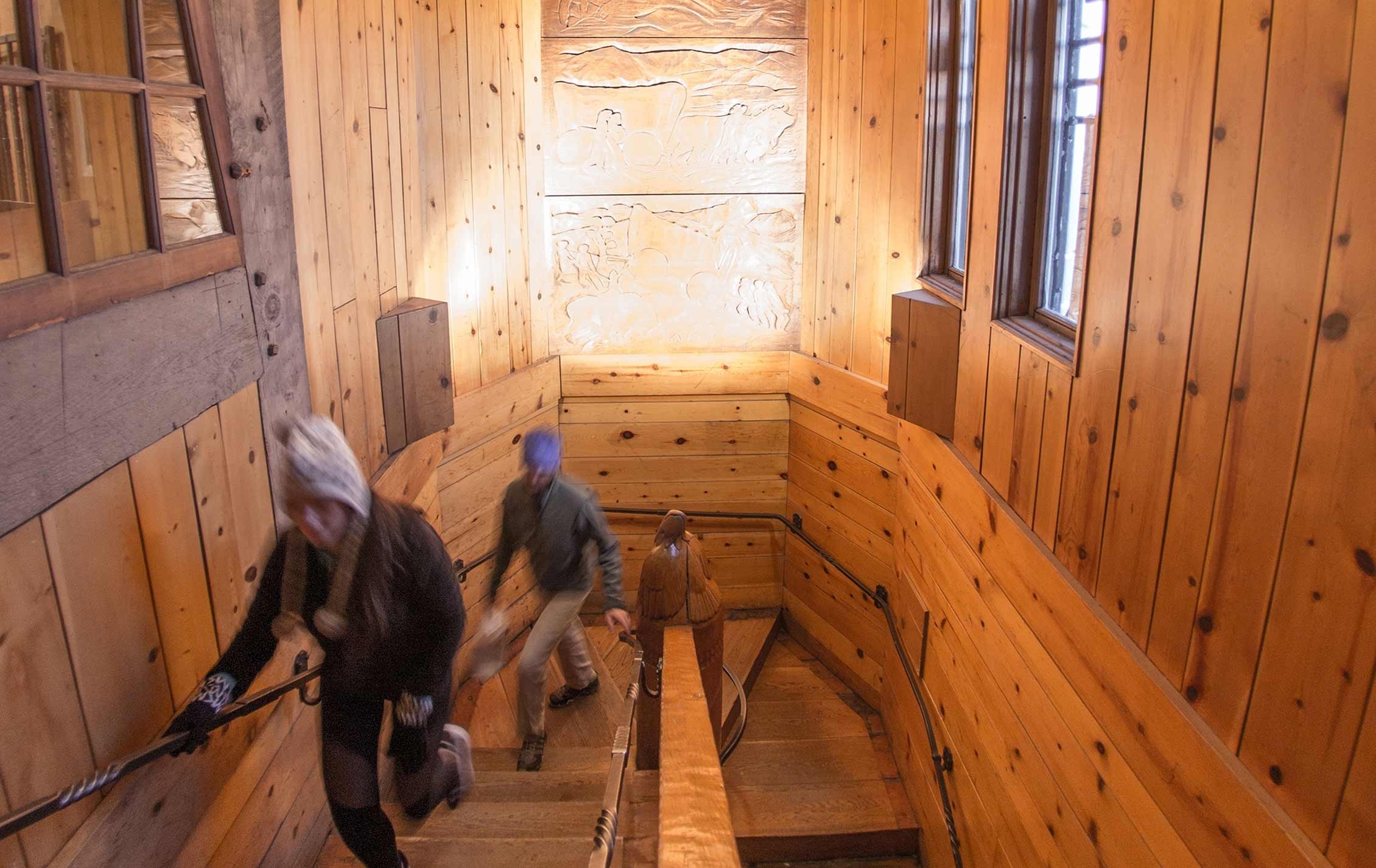 There is an array of woodwork throughout the lodge, from inlaid wood marquetry to wood carvings, reflecting the three themes of the lodge. One prominent carving
is the thunderbird design with mountain motifs below the wings of the bird sitting above the Roosevelt Terrace door. In 2010, the original thunderbird carving was badly deteriorated and a decision was made to replicate a new one, leaving the original in place.
The exterior of the lodge displays carved logs depicting bear and buffalo heads. Due to the high elevation and harsh climate, the exterior of the lodge takes a beating. The corbels have been replaced several times by hired carvers who replicate the originals. The carvers use in-kind materials and sculpt the animals “in the spirit of the originals.” 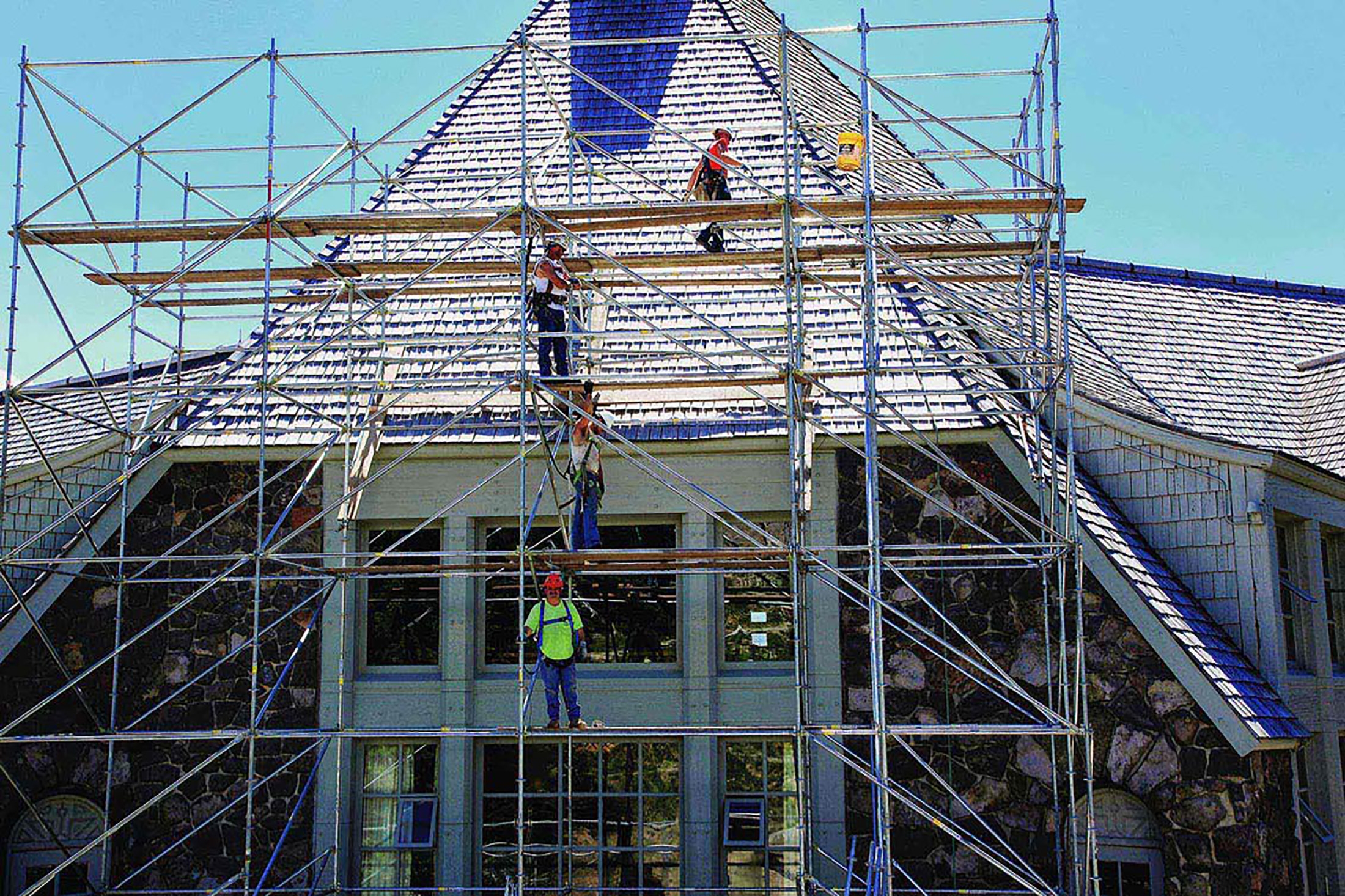 Maintaining and preserving Timberline Lodge in such a harsh alpine climate is a full-time job. Both R.L.K. & Company and the U.S. Forest Service have a team of facilities staff, a historian, a curator, an engineer, and numerous tradespeople and artists who help preserve the historic fabric of the lodge. By preserving original materials at the lodge, we ensure its significance as a National Historic Landmark. The Oregon State Historic Preservation Office partners with R.L.K. & Company and the U.S. Forest Service in order to help find preservation solutions to invasive projects at the lodge. Over the past five years, the U.S. Forest Service has contributed more than $15 million into preserving the Timberline Lodge Complex.

The year 2016 marked the 50th anniversary celebration of the National Historic Preservation Act (NHPA), which created a law to protect our country’s heritage. The U.S. Forest Service is committed to protecting significant cultural resources, to share their values with the American people, and to contribute relevant information and perspectives to natural resource management.

By protecting significant heritage resources, the agency ensures that future generations will have an opportunity to discover the human story etched on the landscapes of our national forests, grasslands, and prairies. This involves making the past come alive as a vibrant part of our recreational experiences and community life. We invite you to join an interpretive tour, grab a guidebook in the gift shop, and explore Timberline Lodge to learn what makes this lodge “the people’s lodge.”